After bad weather almost caused the cancellation of the swim, a break in the storms provided a window of opportunity for Tom to get in the water. The North Channel is often a perilous swim and Tom battled winds and rough water to finish the crossing in 12 hours.

“I couldn’t be more grateful and will call and message as many people tomorrow. Today was one hell of a challenge with winds coming in and really making the swim a 50/50,” he said after the swim.

Tom is one of only 25 people in the world to successfully complete the crossing solo. He took on the epic swim – often referred to as the ultimate long-distance challenge – in an effort to raise money and awareness for children with disabilities in Papua New Guinea.

“I am hoping to raise awareness for ‘The Network of Callan Services for Persons with Disabilities’”, wrote Tom on his Everyday Hero fundraising page. “Callan Services is a not-for-profit organisation that was established by the Christian Brothers in Papua New Guinea in 1991.”

“The money that I am able to raise will go to the support and infrastructure of services that we take for granted every day here in Australia. Their mission is to raise awareness of disability issues, preventative education, screening and testing for early identification of disability in particular in remote areas, provision of sight, hearing and mobility aids and the training and education of teachers in special education.”

It’s a long way from the swimming pool at St Joseph’s to the coasts of Scotland and Northern Ireland, but much of Tom’s climate training was done in the winter chill of the College’s pool. “It was the lessons I learnt and the values that were installed in me at this College that make an attempt at this swim a possibility,” he said.

Tom is no stranger to daunting open water swims. In 2013 he successfully swam the English Channel in support of SIDS and Kids.

In addition to working as part of the Year 12 boarding team, Tom teaches English at St Pius X College in Chatswood.

The community of St Joseph’s College congratulates Tom on his incredible achievement. His swim embodied the Joeys spirit of rising to meet personal challenges as well as working for social justice and seeking to help those in need.

If you would like to donate to Tom’s Swim for Kids, or find out more about the work of The Network of Callan Services for Persons with Disabilities, visit Tom’s Everyday Hero fundraising page. 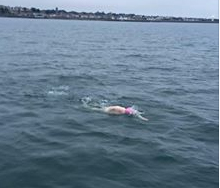